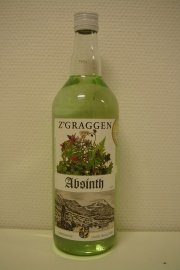 Very few Swiss distillers seem to know how to produce a fine absinthe verte. This certainly isn't one of them.

Yet another absinthe pops out of Switzerland... Unfortunately not all are good. This one is not. I got this bottle for review from Andy at Absint24.net.

The initial smell of it is nothing special. One can easily detect the standard herbs but one can also detect that they aren't of very high quality. Adding water to the Z'Graggen produces a very white and rather ok louche but it doesn't in any particular way enhance the aroma of the drink.

Tasting it doesn't present any spectacular surprises at all. It tates of anise and bad fennel and some hyssop. That's when the bitter kicks in. I suspect they might have used wome wormwood when possibly trying to color it. Not much, but I think that's what they might have done. It's not as bad as in the Segarra 68, but it should'nt be there at all.

Now, this is not an absinthe I would recommend and I don't think it will be available for long.
Fee Verte scoresheet points
56
Powered by JReviews