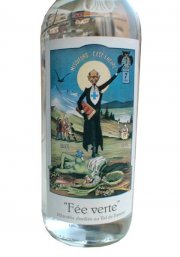 A Swiss La Bleue made before the re-legalisation. In other worms Hausgemacht, clandestine Swiss absinthe.

Distilled in clandestine stills somewhere in the Val d'Travers in Switzerland. The home and origin of absinthe. Completely transparent, illegal and surrounded by myths and rumours - this must be something really special. Atleast considering the prices paid for this. Online one can obtain Suisse La Bleue in the US for about $200 per bottle. Within Europe it can be purchased, also online for about $140. With this in mind I've been longing to try a Suisse La Bleue. And now I have. Am I thrilled? Am I overwhelmed with the mighty powers of this drink? No, I am not.

There are many clandestine distillers doing their own "La Bleues", and I know that there are many that are very good, but they are rarely possible to find, unless you actually go to Switzerland yourself. And once there, if you find someone who wants to sell you some, you do not need to pay those huge amounts, but maybe a third of that. Either way, the one that I tried was actually quite one dimensional.

It was in no way sensational neither by smell, nor by taste. I actually commented to it, while drinking it, that this might very well just be a rebottled ouzo. I then got to try another "blanche" (or "bleue") and found that one much more appealing. However, that one actually was an ouzo. Sure, it was fairly good, and tasted quite allright but it is not worth those outrageous amounts of money. Especially not considering the fact that you order something that has travelled all around the world, supposedly coming from a source you know nothing about, in a non-sealed bottle and could very well be a $15 ouzo.

I am still hoping to one day be able to find a good La Bleue during a visit to the Val d'Travers, but until then I'll stick to the commercial Blanches instead. Much cheaper, and much better.
Fee Verte scoresheet points
0
Powered by JReviews