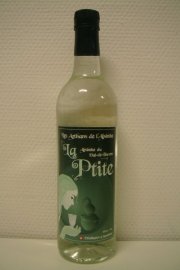 Another La Bleue... This one made by Gaudentia Persoz, likely the only female distiller in Val-de-Travers.

It's another one from the heart of absinthe-Switzerland, Val de Travers. Claimed to be made according to an ancient "family recipe" dating back to 1898 and following the old Swiss tradition of making absinthe it should be quite good. So, I may doubt that this recipe actually would date back to 1898 but there's nothing very wrong at all with this absinthe anyway.

It does yield all the classic La Bleue style characteristics and really isn't much of a surprise in any way. It's well made and quite well balanced in taste. There are better La Bleues to get with a richer and fuller taste and mouth but it certainly isn't bad. The main smell is, of course, fennel and anise but also a nice touch of wormwood. I wish the wormwood had been just a bit more noticable though. Upon adding water it louches nicely into a decent white and brings out a little more of the aroma.

The taste is also quite classical to any La Bleue and does get a bit numbing after a few glasses. Either way there are no obvious distractions or anything the would lend me to say it is bad or flawed even though I personally think they could work a bit more on the wormwood to get that to come forward more. If you're looking for a nice La Bleue you could very well buy this one though I think there are other La Bleues that would be better to start with if you haven't ever had one before. The Clandestine or Kübler for instance. Otherwise, go right ahead.
Fee Verte scoresheet points
70
Powered by JReviews