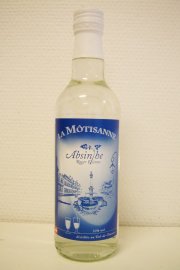 It was time for another visit to Boveresse for the annual Fête d'Absinthe and that means I bring home a bunch of new absinthes to taste, drink and hopefully enjoy.

During the last few years there have been a silly amount of "La Bleues" released from little distilleries in the villages of Val-de-Travers. Most of them are so close to each other in taste that the whole thing is starting to get boring. However, every now and then there are a couple that actually does stand out with a little something making them just that notch better than the rest. The Môtisanne is one of those.

The first thing that meets you when you open the bottle is a nice fragrance of a very floral wormwood. That is a big part of what makes me like it. The wormwood aroma is nicely coupled with the more common scents of a La Bleue and it literally is room filling. There is no way anyone will miss the perfume from this one.

Adding iced water to it of course makes a quick, steady and thick louche and the aroma gets a bit more mellow but stays interesting. Tasting it reveals that it does hold a good portion of wormwood yet manages to keep it well balanced not to be overpowering or bitter in any way. It has a nice rich mouth-feel and it presents just the things I expect from it. Wormwood, anise and fennel and a minty little touch to finish it off. I must say that when I first sampled this at the fair in Boveresse I wasn't impressed but I bought a bottle of it anyway and now I'm happy that I did. It's a very fine representation of a good La Bleue.
Fee Verte scoresheet points
82
Powered by JReviews