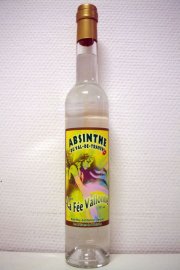 It comes as no surprise that this is another one of those Swiss La Bleues. Bought at the annual absinthe festival, Fête d'Absinthe in Boveresse.

From the 10th annual Boveresse Fête d'Absinthe, June 2007 I brought home a load of new Swiss absinthes. One of them was this La Bleue, La Fée Vallonne.
As most other La Bleues it is distilled in the Val-de-Travers region and carries the typical flavour profile of a Swiss La Bleue. Or, does it? Well, it is made in the Val-de-Travers but it actually differentiates itself a little bit from the many all too familiar La Bleues available.

With a very pleasant Wormwood aroma up front, nicely accompanied by Fennel and what appears to be Hyssop it blends into a rather fine herbal mix. Upon the addition of iced water it louches nicely even though it's not really an enticing show it puts on or anything but rather a plain and simple louche. It ends up a nice opaque grayish white though, a little bit paler than I expected but otherwise very good. After the water has been slowly dripped into the glass the aroma flattens a bit but then the anise breaks through and lends a fresh sweet nose.

The taste is actually much like a typical La Bleue but with reminders of something leaning toward the Brut d'Alambic mixed with Blanchette. The Wormwood which is constantly just a bit ahead of the other ingredients does improve the drink a lot. That is what makes me like this a bit better than a lot of the other La Bleues. There are so many now that it definitely takes some effort to make something a bit more interesting. This was a nice drink.
Fee Verte scoresheet points
79
Powered by JReviews