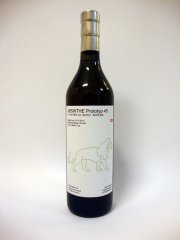 Every now and then Absinthe.de release prototypes of forthcoming releases to the public. They often offer a nice look into what is coming and the stages of development to get there. In this case a prototype of a "pre-ban replica", or rather a modern representation of a vintage absinthe.

Every now and then Absinthe.de release prototypes of forthcoming releases to the public. They often offer a nice look into what is coming and the stages of development to get there. The prototype absinthes are never the final version of the product.

In this case it is a prototype of a "pre-ban replica". Or rather a modern representation of a vintage absinthe. Interesting...

So, initial aroma is very herbal, in some aspects almost peppery but not disturbingly so. It turns quite floral and fresh after only a short second and reveal a nice clear wormwood character.

The color is a green tone leaning towards the classic Feuille mort (dead leaf) brown as opposed to the fine green we're used to in absinthes coming from Oliver Matter. No wonder, since it's supposed to mimic a vintage absinthe...

Adding iced water to the absinthe produces a decent louche but it has to be really slow and ice cold water or else the louche gets too thin.

The same nice wormwood profile remains after water is added and the floral tones are enhanced further and there's a hint of Coriander lingering next to the classic anise and fennel. There is also something else in there that I cannot quite pin down yet but it adds a very interesting touch to the overall aroma.

The mouthfeel is quite rich but not as creamy as I'd like it to be given the nice aroma. However I'd say this is simply because I personally think it lacks a bit of anise in it. Added anise would both enhance the louche, the mouthfeel and take that little edge of the slightly bitter tones I get in the taste.

The taste is by no means bad. Oh no. Everything is there only less balanced than in other offerings from Matter but again - this is a prototype and it's supposed to have its jagged edges like that. This balance would also be achieved with a bit more anise. A very nice touch in it is that they've managed to replicate the "old taste" found in vintage absinthes quite well.

So... I've had this bottle for about a month now and I must say that even in only this short time it has definitely developed and improved further. I see a lot of goodness in this one and I am confident that the final product will be great. It is not what we might be used to from Oliver Matter/Absinthe.de but it's certainly not for the worse.