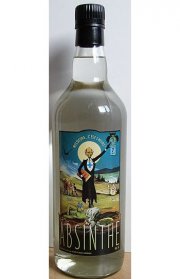 Once more a La Bleue from Couvet in Val-de-Travers. It seems to never end. But as long as what they make is good, why stop them...

Again, from Switzerland - another La Bleue. The Marco Previtali fits right in among the classic La Bleues with the characteristic fennel and anise aroma in combination with a slightly wormwoody and minty character. The Marco Previtali is actually a quite nice La Bleue but it doesn't exactly show off any specialties that would place it above the rest. It's a rather ordinary La Bleue.

The aroma is as I mentioned mainly fennel and anise, with that in mind I had actually expected a slightly thicker louche than what I got. After louching the color was a slight blueish white and quite allright. The aroma did bloom out a bit more but still nothing unexpected or intrigueing in any way.

The taste is rather well balanced and not too numbing in any way. Over all it's a decent absinthe and fares quite well compared to others. I would say that the Marco Previtali is as good as any classic La Bleue but not at the absolute top. However, if you see it, buy it.
Many thanks to my swiss and german friends for getting me this and giving me the chance to try it.
Fee Verte scoresheet points
63
Powered by JReviews