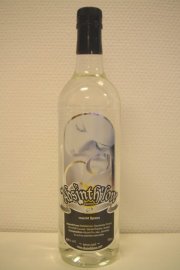 The name and label says it all. Even though it's aiming at the night clubs this La Bleue is actually worth going to bed with. It's quite juicy.

In the little town of Couvet is the distillery of Gaudentia Persoz and her family. The maker of La Ptite Absinthe and this one. The Absinth Love 69 is not surprisingly, looking at the label, aimed at the younger clubhopping crowd. In a way that is for once a good thing given that it is actually a traditional La Bleue, distilled and an entirely natural product. Rarely seen targeted at that group.

Question is, will it make them actually enjoy a good absinthe for what it really is? Time will tell.

The Absinth Love 69 is actually a rather good La Bleue with the difference being that it is at a higher alcohol level. Sadly this is also what comes through too much both in the aroma and in taste. There is a noticable amount of wormwood in a rather fine mix with the dominant fennel and anise. The wormwood does carry out in taste as well, but not very much.

Adding water to it produces a rather quick but nice louche and it all ends up in a blueish white opaque drink.
It's a nice absinthe but the alcohol comes through too much in both aroma and taste to take it all the way. I guess that will appeal to the targeted crowd though, and it might actually turn some of them into absinthe drinkers. Real absinthe, that is.

Either way, it's a decent La Bleue but to be honest I'd stick with the La Ptite from this distiller. It's a better La Bleue, with a more "complete" taste and better body.
Fee Verte scoresheet points
71
Powered by JReviews