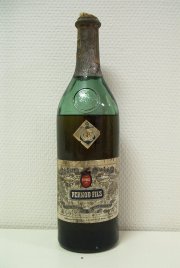 Pernod manufactured absinthe in Spain all the way up to the mid 1960's and these vintage absinthes are some of the more common ones still found unopened today.

After the ban of absinthe in France, 1915 - Pernod moved their absinthe production across the border to Tarragona, Spain. Absinthe was readily produced in Spain by many distilleries already, and Pernod tried, somehow, to convince many spanish distillers to stop their production. The recepies of absinthe have always changed over time. The absinthe available in 1900 was not exactly the same as in 1800, but the Pernod Fils absinthe experienced a quite distinct change when the production moved to Tarragona. That is the reason for the difference in price of vintage Pernod absinthes from France before the ban, and the ones produced in Spain, after the ban. Also, the taste differs quite a lot.

My first thought when I saw the bottle was, wow. A vintage Pernod Tarragona. Actually, I must say I was a bit disappointed. After pouring some in the glass, I let it sit for a short while and then, smelling it out of the glass, revealed a nice smell. It was pretty close to the vintage Absenta, but not as smooth. The smell was a bit harder, more straight forward, than the absenta, but in no way bad. The anise is definitely present, but not overwhelming. The wormwood too, is certainly detectable and well mixed with the rest of the herbs. But it never gets that really smooth smell and rounded nose.

Adding iced water to it, certainly brings out the best of the Pernod Tarragona, and it smells very nice. The previously "hard" character of the drink have turned really nice, and a more balanced body appears.

Drinking it is ofcourse a great experience, but I must still say, it was a bit of a disappointment. Then again, it is not a pre-ban Pernod, and it is not produced in Pontarlier... It has a good balance between floral freshness and the bitterness and alcohol heat and letting it sit in the mouth for a while teasing all taste buds, does actually bring out that little extra, which it needed so bad. At this point it is very good, but still lacks of something.

It does ofcourse beat most brands available as of today, and it is a very nice drink. Still, with many good brands available now, I wouldn't swing the $1000 for a bottle just for the taste. Allright, it's vintage, hence the high prices - and in that perspective, sure. But not for the taste. If any of you out there has one for sale, at a humane price, though, I'm interested.
Fee Verte scoresheet points
74
Powered by JReviews