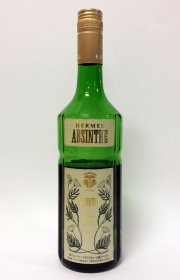 This Japanese treasure comes from a time when people in the west knew little about absinthe's quiet existence in very few countries but the Japanese had full access to it, made by Suntory.

Ok then, a Japanese absinthe? Yes indeed. Something like 10 or so years ago I stumbled across an auction for a Japanese Hermes Absinthe. Sadly I lost that auction because the seller suddenly decided not to ship the bottle outside Japan and I thought my only chance of getting my hands on one of those had passed.

You see, the Hermes Absinthe was made in Japan from around the 1950's up to mid 1980's and not in very high volumes so it was - and is - quite hard to come by. Then as luck would have it several years later I met a good absinthe friend in Pontarlier, France, who runs an absinthe bar in Tokyo (Rogerio at Bar Tram). We were talking about the Hermes and a million other things and I thought no more of it. Anout a year later Rogerio was participating in a skateboard competition in Malmö, Sweden and we set a meeting for some drinks. You know the outcome here, right? He actually had a bottle - this bottle - of Hermes Absinthe which he extremely generously handed over to me and pointed out that I deserved it. Don't know why, but I am forever grateful.

This bottle is from around 1980 and the design was changed a bit from the bottle I had previously tried to buy which was from the 60's. I like the design of it but especially the labels. They have a vintage nice feel but they're not the classic old French or Spanish style absinthe labels. Of course, I have no idea what the back label says but one of these days I'll get a translation.

Regardless of what the label says the nose out of the bottle is very much licorice. The aroma reminds very much of a Berger pastis from around 1960. Licorice, anise and a fine herbal mix which give it a good kick. The color is a light brown amber and looks really nice. Once in the glass the licorice is toned down a bit and the aroma is better balanced it just really wanted to get out of that bottle.

Sure enough it's closer to a fine Pastis than an absinthe in many aspects but it still has character and profile pushing it towards an absinthe. It reminds a little also of a Spanish absenta.

Adding iced water produces a very nice, thick and steady louche and ends up in a perfectly opaque very loght yellowish brown, almost white. The aroma is again more mellowed and well balanced and the licorice steps down several notches and let the nice herbal scents through. By all means it's still a lot of licorice but more appealing now than just out of the bottle.

Tasting it then... It's definitely much like a quality pastis. With a normal 3:1 water ratio it gets a little too much and I find myself not wanting more than one glass. Add more water up to a little more than 4:1 and it's quite enjoyable, especially now during the cold winter months. It's not a summer drink - simply because I don't want to add ice to it like with some Pastis'.

All in all I am very happy that I got the bottle and I do like this one. Now I'm on a quest to locate older variations of it from the 50's and 60's. From what I've heard they are much closer to a good absinthe... We'll see what happens with that but one thing is for sure. This bottle will soon be empty.
Fee Verte scoresheet points
70
Powered by JReviews