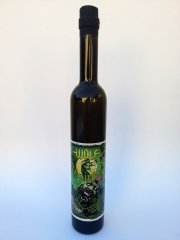 The third offering from the small Swedish distillery Sankta Annas Bränneri in Linderberg. Made in a former church for a Swedish Metal band. Oh, and there's a zombie on the label...

The small distilleri in Lindesberg, Sweden continues their quest to conquer the absinthe world. First came Valkyria, then the Christmas special "absinthe style snaps" Midvinterblot and now this, Wolf Absinthe. The Wolf is made for a Swedish metal rock band with the same name and both alcohol level and the label definitely wreaks of the metal heritage. Zombie brains and 66.6%... Incidently not only the number of the Downstairs Lord but also the same as the Mansinthe, which isn't much of a surprise really.

When removing the neck foil a nice special made t-cork top is there... With the design of an alambic embossed it adds a nice touch to the presentation. I guess the same stoppers will be used on Valkyria from now on. Nice one. Opening the bottle and pouring some in the glass first of all reveals a light green liquid. It is maybe just a little bit light for me to be really intriguing but it's a nice, natural green even so.

The aroma of the Wolf shows off a very flowery perfume at first with a lot of promise. A nice touch of wormwood, pontica and hints of coriander and of course fennel and anise. Star anise is yet again present but to a slightly lesser degree than the Valkyria, at least in the initial aroma. After a while I get hit by a heavy kick from the alcohol coming through in the aroma. Be careful not to put your nose to far into it. It's hard to get back to the initial flowery characteristics after that.

Adding water to the Wolf Absinthe slowly presents a thick and steady louche building from the bottom forming a fine clear layer on top which gets thinner by every drop of water until the drink is completely opaque. It's clear that there is star anise to help the louche but it's actually less instant than in the Valkyria.

After fully louching the drink it turns to a very light green, almost white, glass of zombie eating fairies. The aroma is once again quite flowery but with a slightly earthy tone and also a touch of citrus and a little mintyness. A faint hint of tails can be detected if you're picky, which I am. It's not the most complex aroma I've experienced but for this absinthe I guess that's in a way a good thing. Marketing a drink for a Metal band, I guess the intended crowd isn't going to pinky-out over the hints of pontica marrying with the anise and fresh blossom of wormwood any time soon...

The mouthfeel is maybe a little bit too flat for my own taste. I want it a bit fuller and richer but it's by no means in error. It leaves the mouth just slightly dry with a bit of a numbing from the star anise but not to the point where it gets cloying.

The taste follows the aroma quite well with star anise, pontica and wormwood being up front. The overall character is a bit pointy maybe with tastes and scents all over the place but that may very well be because the drink should be left to age for another month or two. I think the Wolf would benefit from a little more time.

In other words, it would need a little better balance according to me. Some of that pointyness will be mellowed out by time. So when you buy one - give it time.

Is it metal enough for the rockers? Yes. It does have the feminine touch that an absinthe should but it will definitely get any long haired sweaty rocker drunk of his feet before he knows it. He will without a doubt enjoy it while he drinks it and many of them will probably find themselves surprised, discussing the many flavors of an absinthe.

Is it good enough for me? Well, as I said - it needs time. Slightly better balanced, a little less star anise and rid the tailsy touch and I would say so. It's different enough from the Valkyria to be an interesting addition to their portfolio of absinthes.

The Wolf Absinthe is a fun bottle on the shelf with its weird "Swiss style bordering on tacky" design and is sure to catch everyone's eye. It's a middle-of-the-road absinthe that anyone could enjoy so... If you liked the Valkyria and would want to try something with a little more edge but still in traditional absinthe style then the Wolf is a good bet.

Let's put it this way, if the Zombie apocalypse would be on us tomorrow the Wolf Absinthe would be one of the absinthes I'd drink rather than use for Molotow cocktails to kill the brain eating drewling cross-eyed monsters.
Fee Verte scoresheet points
69
Powered by JReviews