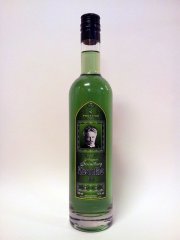 This essence based absinthe come from a small company, based in Malmö - southern Sweden, known for their liqueurs and aquavits manufactured by mixing essences. The name may be recognized from "Prestige Absinthe Essence"...

If you've ever stumbled upon - or searched for - absinthe essences online or elsewhere it is highly likely that you've come across the Prestige Absinthe Essence. Now you know where the "Prestige" part in the name of this absinthe come from.

The packaging of the Strindberg absinthe is a plain transparent glass bottle with a screw cap. Front label depicts the well known face of August Strindberg. The label is a mix of traditional and modern style labels. The name of the absinthe was supposed to be "August Strindberg Absinthe 35" at first, with the 35 referencing to thujone. Thankfully they opted to drop that and changed it to 55 for the alcohol level. It appears as if the back label is missing on my bottle since there is none and the front label has no sort of ingredient list or anything. Since law requires all additives to be stated on the label I suspect this is simply an error in labeling. The Strindberg is "artificially" colored with E140 (Chlorofyllin).

Speaking about color... The August Strindberg Absinthe has a rather nice green color actually and not the blueish green that so many other essence based absinthes have. It's not perfect but far from bad.

Opening the bottle and pouring a shot in the glass instantly reveals a rather odd scent. Once it's poured and I start to analyze the aroma it is clear that all the wonderful elements of a crafted distilled quality absinthe are missing. It smells chemical in a way with a typical cough syrup character. Alcohol and the characteristic smell of anise essence mixed with the bitter tones of wormwood extracts are the most dominant constituents. It's strange, because it all blends into a sort of plastic smell. After a short while it simply turns bland.

Adding ice cold water to it produces a quite nice louche which slowly forms from the bottom into a fully louched glass of absinthe. The color after adding water is a light white-green. Not at all bad.

The mouthfeel of the August Strindberg Absinthe 55 is quite harsh and dry and it leaves a bit of an oily film in my mouth. The taste goes from bubble gum to anise essence and then on to a harsh bitter wormwood extract taste leaving me with a dry tongue.

There are three redeeming things about the August Strindberg Absinthe... The price (€28 for 500ml), the color and the louche. It would do well as a cheap alternative for a photo shoot of a glass of absinthe.

To be honest I am disappointed. I was actually hoping they would have managed to put something decent together even though it's an essence mix. An Absinthe carrying the name of one of Sweden's greatest writers and absinthe drinkers should be a top quality product. Anything less is a shame.

So, unless you buy it to look at it, I'd get something else considering I couldn't even bear to finish half the glass.
Fee Verte scoresheet points
37
Powered by JReviews