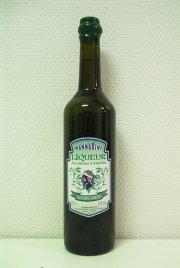 This is a little something extra special from the Island of Corsica. I guess the special ends there since the drink itself presents nothing special at all.

This particular absinthe comes from the little island of Corsica, just outside the french and italian coastlines. That does make this absinthe unique - and... that's it.

Ok, there's one more thing that makes this absinthe unique, and that's the fact that it won an absinthe competition in Marseilles, France. Having had a few glasses of this one, I would say that tells more about the judges in that competition than this "absinthe".

For starters it's artificially colored, it's sweetened and it's pretty much just artificial taste. The first few sips I had was not all bad, but the more I had the harder it was to drink it.

The smell is nothing spectacular, much like any mass produced essence mix found anywhere else. It does present a nice, but maybe a little too green, louche, but adding that water to it, doesn't help the smell. Adding sugar to this one makes it almost undrinkable since it's already heavily sweetened.

There's really not much I can say about this one. There's no need to buy it unless you have a terrible urge for sugar and extracts and colorants. There are many better products at the same price.
Fee Verte scoresheet points
0
Powered by JReviews