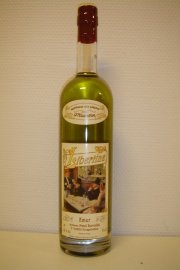 During a short period of time several producers started adding wormwood to the coloring or wormwood oil to increase thujone content and get a stupid marketing point. Problem is, they all come out bitter as well.

And this is another one that I bought in Pontarlier, sadly...
The Libertine range of absinthes come from the Paul Devoille distillery in Fougerolles, France. The same distillery that makes the Charlotte (which I believe is pretty much just rebottled Libertine 55) and also the "Emanuelle" for Vom Fass (which also is Libertine 55...). It is also the same distillery which, with the help of the Liqueurs de France people produces the Verte and Blanche de Fougerolles.

The regular Libertine 55 and 72 are drinkable absinthes which I think many people can enjoy, at least novices... The Libertine Amer is something I think very few will enjoy.

It's got a pretty good color, deep green and very nice. But once the bottle is opened and I move it closer to my nose to take a whiff, I'm scared. It smells mainly of alcohol and gives off a bitter, dirty nose. I pour some in a glass hoping that it will not be the same then, but it is. Adding water to it reveals a nice louche and still a decent color. The nose remains the same, an odd intense sort of dirtyness.

At this point I haven't added any sugar to it yet and I will pay dearly for that. It is obvious that they have simply added wormwood oils to get the "amer" version. It is obtrusive! It has this really sticky bitterness that is typical to the adding of essenses. The taste of the Libertine Amer is nothing special at all, not even once you get past the bitterness. It's mainly anise. To be able to continue drinking the glass, I dissolved a sugar cube in some water and added that. It didn't help. I added another one - it still didn't help. I never finished the glass. This is another one of those bottles that will last forever.
Fee Verte scoresheet points
52
Powered by JReviews