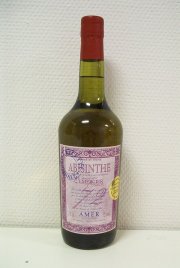 Take the original Abisinthe 72 and add wormwood oil or add wormwood to the coloring step and this is what you get. It's bitter but not better.

Upon opening and smelling out of the bottle I don't get much more than a rather smooth alcohol smell slightly enhanced by anise and wormwood. This being the "Amer", french for "bitter", I expected a lot more wormwood than this, it seems pretty well balanced though. After pouring a dose into a glass the smell does alter slightly, and more of the herbal character is revealed.

Adding iced water to it produces a nice, thick louche and during louching a finely divided top layer slowly disappears with the water. The taste of the Abisinthe Amer 72 is very distinct. At first it tastes a bit spicy, which turns into a nice herbal character instead. There is absolutely a good bit of wormwood taste, but I believe there's and addition of wormwood extracts or oils added to it, to produce its distinct sort of spicyness. It's not bad at all but it doesn't have the regular taste of distilled wormwood only. Either way, the spicy kind of herbal notes is finely tuned with the freshness of anis.

The Amer strikes me as a more carefully prepared absithe than the regular Abisinthe 72. I like that one also, but this is definitely better. Adding sugar to the Amer obviously produces a sweeter drink, but also blends the different tastes a bit. The Amer works very well both with and without sugar.

My conslusion about this one is that I really do like it and recommend it to everyone. It's a very good absinthe with a little more taste than it's sisters. Previously the back labels on the Abisinthe labels instructed on how to prepare your absinthe using the burning sugar method. The Lemercier distillery have now decided to remove this reference and only write instructions for the traditional french ritual. I will take some credit for that...
Fee Verte scoresheet points
68
Powered by JReviews