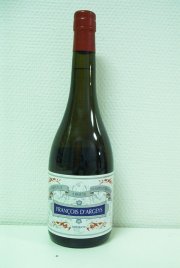 A distilled absinthe from France, early on the market but it made little impression and it's not very common in stores. I believe it has been discontinued.

This particular absinthe is no longer in production. It was first released in 2001, in the town of Pontarlier, France. Distilled by Lemercier, but never labelled with their name. Alledgedly made for someone who ordered it, but the resemblance between the label (and name) of the Francois Guy, and the bottle shape of the Un Emile, which where both released just prior to the Francois d'Argeys, does hint that this was also meant to compete with those two, not only in taste...

So, the question is - how does it compare to those two - in taste? I'd actually have to say that it competes very well with them both. It presents a rather anise-laden smell when opening the bottle, but not as much as the Francois Guy. It has a little more of the toned down character of the Un Emile. However, this is not mainly for comparison, but for tasting the d'Argeys for what it is.

The Francois d'Argey is actually not that bad. A pity that it's only at 45%, but still a nice enough drink. It louches very well, and even though it doesn't present any surprises or any overwhelming complexity, I do like it for an occassional drink. The taste is mainly that of anise, but as I said, not as overpowering as the Guy.

I'd say that this is actually a fairly good absinthe. Maybe nothing I'd drink regularly, but certainly something you could try if you got the chance.
Fee Verte scoresheet points
0
Powered by JReviews