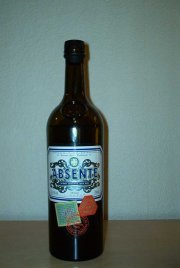 The US version of the Absente 55%. European version differs only slightly and since this was reviewed a new product, Grande Absente, have entered the market.

This particular bottle was bought in USA, and therefor contains no wormwood. Instead 'petit wormwood', which is legal in the US, is being used. That alone would probably classify this as a pastis, but as the real, european version contains wormwood I will keep it here. It has a certain bitterness to it, a little like the Pernod 68, but not at all as complex and a little sweeter and have a more distinct taste of anise. It gives a nice louche upon the addition of water, but the instant louche after only a little water indicates the use of essences and star anise. Adding sugar to it increases the taste quite a bit even though it is quite sweet in itself from the start. It does somehow manage to bring out a bit more complexity in the otherwise quite one dimensional taste. I haven't yet tasted the european version, but I guess it's pretty much the same. I actually find the Absente to be quite tasty. Not at all in the way of a true absinthe distillé, but it is refreshing and not overwhelmingly sweet. If you like anise based spirits, you will enjoy the Absente.
Fee Verte scoresheet points
30
Powered by JReviews