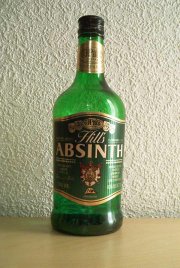 One of the absolute first absinthes to hit the market in the mid 1990's. Based on all things that absinthe is not but still a little of a pioneer in the world of absinthe.

Ouch. That hurt. A Czech absinth entered my collection. Why? Well, a neighbour of mine had the bottle and they didn't ever drink it, so I bought it. The only really nice thing with this one, is that it's not the standard Hills bottle, but an older one, which I believe is not used anymore. Enough of that and on to the tasting. Not much of a tasting I can say. It smells of nothing but alcohol. It tastes nothing but alcohol when tried neat. It tastes nothing but alcohol when diluted with water. It doesn't louche at all, and it actually has nothing at all to do with a traditional absinthe. So, in this aspect it is not a very good absinthe, I'd say.
Fee Verte scoresheet points
15
Powered by JReviews